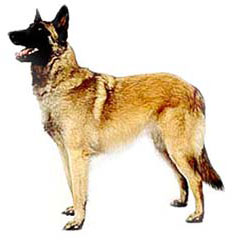 The history of the Belgian Malinois began late in 1891, when veterinary professor Adolphe Reul coordinated a gathering near Brussels of shepherd-type dogs to determine whether an authentic Belgian Shepherd existed. By the end of the meeting, Reul and his colleagues had concluded that such a dog did exist: a squarely built, medium-sized dog with brown eyes and high set, triangular ears. They also decided that within the breed were several varieties differentiated by coat texture, length and color. Not long thereafter, the Belgian Shepherd devotees named three such varieties: the long-haired, fawn-to-charcoal colored Tervuren and the short-haired, fawn-to-charcoal colored Malinois (although not recognized in the United States, many Belgian Shepherd fanciers also include the Laekenois as a fourth type—the one with the wiry, wooly coat). By 1912, the American Kennel Club KC registered all three varieties as Belgian Shepherds, but within 40 years the effects of the Great Depression resulted in the virtual eradication of the breed. After World War II, however, interest in the breed revived, and American enthusiasts began to import dogs from Belgium to reestablish the breed. By the 1950's however, some breeders in America began to advocate separating the three Belgian Shepherd varieties into distinct breeds. The AKC acceded to this request in 1959, when it established three Belgian breeds: the Belgian Sheepdog (or Groenendael), the Belgian Tervuren, and the Belgian Malinois. Currently, the Belgian Malinois ranks 90th in the list of popular breeds, well above the 107th ranked Tervuren and the 122th ranked Belgian Sheepdog (Groenendal).

The Malinois is an intense, sensitive individual who is willing to dedicate himself not only to his jobs, but also to his human. Some Mals are reserved with strangers, while others are friendlier. Socialization in puppyhood and throughout the dog's life is crucial to avoid fearfulness. This dog won't do well leading a life of solitude; he lives to work and play in partnership with his people. He doesn't consider himself a pet, but a partner. Get to know him, and that's how you'll see him, too.

The Malinois is a medium-to-large dog, ranging from 22 to 26 inches in height and weighing between 50 and 75 pounds. The short coat can be fawn to mahogany in color, but every Mal sports a black mask and ears. To the untrained eye, a Mal may look like a German Shepherd, but there are subtle differences between the two breeds. The Mal has a shorter back and smaller ears than a German Shepherd, and is less heavy in body and bone.

Consistent, positive training from puppyhood is crucial to helping a Mal learn to live happily with his human packmates. Also important is early and continuous socialization to help the Malinois develop his natural good sense about people and situations.

The Mal is pretty much a wash-and-wear dog; a couple of brushings a week will control any shedding that occurs. Weekly pedicures and ear cleanings will help him look and feel his best, as will bathing when he needs it. Daily, strenuous exercise will help him be a mellow fellow indoors. This breed excels not only in law enforcement work but also in tracking, agility, herding and search-and-rescue work.

Like all purebred dogs, the Belgian Malinois has some genetic health issues. Among the most common are hip dysplasia, progressive retinal atrophy, cataracts, hypothyroidism, and epilepsy. Dogs intended for breeding should receive OFA (for hips) and CERF (for eyes) clearances before being bred. Ask your breeder about these issues and test results.

Jany, an explosives-detecting dog trained to do 1000-foot tandem jumps with the Columbian Group of Air Special Commands.

© Copyright 2014 LifeLearn Inc. Used and/or modified with permission under license.