What is the upper respiratory tract?

The upper respiratory tract includes the nose, the throat (pharynx and larynx), and the trachea (windpipe). The surface of the respiratory tract is lined with a mucous membrane, which is a layer containing specialized cells that secrete a protective mucus coating onto the tissue surface. The eyes and inner surfaces of the eyelids are covered by conjunctiva, a membranous tissue that has a similar structure to the respiratory mucous membranes (for further information, see handout "Conjunctivitis in Cats"). Tears drain from the eyes through a tube called the lacrimal duct, which drains into the back of the nose. Because of this anatomical connection, the conjunctivae are often grouped in as part of the upper respiratory tract and may be affected with upper respiratory disease.

What are the signs of a chronic upper respiratory infection?

"Because smell is so important in appetite, many cats have poor appetite and lose weight." 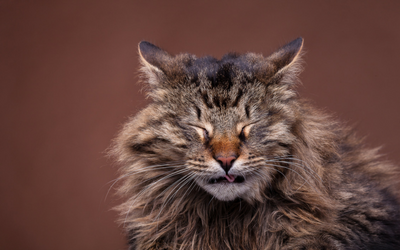 A runny or stuffed-up nose (the sniffles) is the most common clinical sign in cats with chronic infections. The nasal discharge tends to be thick and often is yellow. It may also be red-tinged (fresh blood) or brown (older blood). One or both nostrils may be involved. Because smell is so important in appetite, many cats have poor appetite and lose weight.

There may also be inflammation in the throat making swallowing uncomfortable. This may lead to drooling in some cats.

Affected cats may have a chronic discharge from one or both eyes. In severe cases, facial swelling and resentment of handling or touching the face may occur due to pain or soreness. In other cases, these chronic signs are relatively mild, such as episodes of sneezing accompanied by a clear nasal or ocular discharge. Cats with mild symptoms usually have normal appetites. These milder cases may cause more distress to the owner (due to the constant sneezing or runny nose and eyes) than to the cat.

What are some of the main causes of chronic upper respiratory tract disease?

There are many causes of this relatively common problem in cats. Feline viral rhinotracheitis (feline herpesvirus) and calicivirus were the primary causes of chronic upper respiratory tract disease prior to the development of vaccines in the 1970's. These viral infections caused such severe mucous membrane damage in some cats that healing was incomplete and left the membranes susceptible to secondary bacterial infection. (See handouts "Feline Herpesvirus Infection or Feline Viral Rhinotracheitis" and "Feline Calicivirus Infection" for further information on these viruses).

These upper respiratory viruses tend to persist in some cats, known as carrier cats, for weeks, months, or even years. In some, but not all, of these carriers, the chronic viral infection damages the protective mucous membranes and allows bacteria to invade the damaged tissues and causes persistent clinical signs. Vaccinated cats that have not been given the appropriate booster vaccines (especially against feline herpesvirus) or have been exposed to particularly virulent strains of herpesvirus may still become infected with one or more of these viruses, and later in life exhibit chronic post-viral rhinitis and conjunctivitis.

Chlamydophila felis and Bordetella are bacteria that can cause primary respiratory infections in cats. A group of organisms called Mycoplasma can cause primary respiratory and eye infections, or play a secondary role, along with bacteria such as Pasteurella, Streptococci, Staphylococci, and many others. There is no feline vaccine for any of these organisms except C. felis. The immunity provided by the C. felis vaccine is relatively short-lived and boosters are required on an annual basis (see handout "Chlamydial Conjunctivitis in Cats"). Vaccination against C. felis is recommended only in special circumstances.

In unvaccinated cats, chronic upper respiratory tract disease is a relatively common problem. The most common form is termed chronic post-viral or idiopathic rhinitis. In this condition a viral infection (e.g., caused by feline herpesvirus or feline calicivirus) causes the initial mucosal damage but the chronic signs relate to secondary bacterial infection of the damaged nasal passages. This may then lead to chronic osteomyelitis of the nasal turbinate bones, which is a bacterial infection of the fine bones within the nasal sinuses.

What about other causes?

Some fungal infections can cause chronic upper respiratory tract disease; these infections are more likely in certain geographic areas. Cancer (neoplasia) affecting the upper respiratory tract is rare, but may need to be ruled out in certain cases (see handout "Nasal Tumors" for more information). In a few cats, non-cancerous nasal polyps may cause chronic sneezing and discharge. There may be occasions when your veterinarian will need to rule out other causes such as trauma, foreign bodies trapped in the nose, or even dental disease.

How is the cause diagnosed? 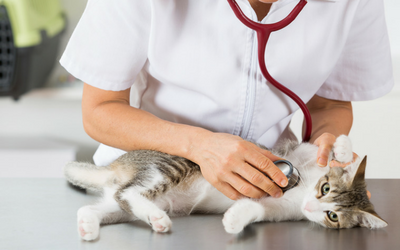 In order to determine the extent and nature of the disease it is important to get an accurate history. Any past respiratory or eye infections, previous trauma such as an accident or fight, or dental disease should be reported. Details such as the onset and progression of the problem and the color and consistency of the discharges are important. A thorough physical examination may also require blood work, swab samples for laboratory microscope examination and culture, radiographs, and tissue biopsy. Culture of the discharge may reveal a variety of bacteria, but these are often secondary invaders. Anesthesia may be necessary for a thorough nasal examination or to acquire certain diagnostic samples.

How can this problem be treated?

The treatment will be determined by the test results and diagnosis. In many cases, no specific initiating cause can be found. Antibiotics typically give an initial dramatic improvement that is often short lived. Targeted nutritional supplements such as L-lysine that aid in mucous membrane repair and maintenance and general immune system stimulation can be helpful, especially in chronic viral infections. Anti-viral and immune-stimulating medications may be beneficial in some cases. In spite of our best efforts, some cases remain chronic or at least recurrent. The treatment goal in these cases is to reduce the cat's discomfort through periodic medication and improve its quality of life.

© Copyright 2017 LifeLearn Inc. Used and/or modified with permission under license.